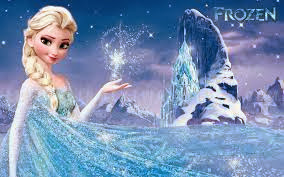 I feel pretty confident in stating the end of this year’s stupefying winter. Disney’s Frozen comes out on DVD and Blu-ray March 18. That is when they will end this nearly four-month long publicity stunt.

When the animated film slid past the $300 million mark on January 8, I thought they would turn the polar vortex machine off and give us all a little thaw. Then they re-released a sing-a-long version – so they kept the weather machine on ice (which means the opposite of what it usually does when you’re talking about a weather machine.) I thought this might end last week, but they announced the release date for take-home units and boom – the return of the Winter Kingdom (as it is called in South Korea, where the movie is setting records without all the weather-related promotion.)

My theory is that Walt met with Nikola Telsa at the New Yorker hotel in 1943. Walt agreed to back a number of Tesla’s projects, knowing that a lot of them were going to be perfect for his grand amusement park plans. Tesla dies soon after. Nearly all of his personal notes were nowhere to be found. Of course, no one thought to look in Hollywood. (A great sequel to Savings Mr. Banks would be Nearly Saving Nikola.)

Disney used Tesla’s weather machine sparingly – just a nudge here and there to help make the worthless swampland he bought in Florida habitable. His successors saw things differently in late 2013, leading us to the Frozen winter of ‘13-14.

I’m asking Disney to turn the damn thing off if I pre-order the combo set. I’d like to let it go, let it go, but the cold does bother me anyway.
Posted by Michael J. Martineck at 8:30 AM 1 comments 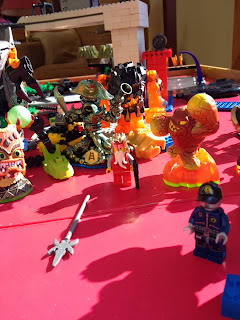 I have been losing ground in the house for several years. The toys have been spreading from the family room out like a plastic Sahara, advancing its primary colors into the kitchen, living room and, gasp, master bedroom. I’ve long faulted myself for lack of diligence. I had a one-toy rule for a long time. I’m still wondering what happen to it. Like my good flashlight or the key to the side door, I feel it here, around me, but of no use. And so the toys perpetuate their campaign, but I no longer blame only myself. Yesterday, my eight-year-old Max built a Lego ambassador and sent him to the Skylanders. I overheard the meeting. They vowed an alliance, whereby they would work together to overthrow the house and subjugate (my word) the humans. Our time had passed. We could still pay for the food, heat and water; we could no longer rule. I’m not really afraid of Lego and the Skylanders. Sure, they freakin’ sting when you step on them, but I can take ‘em. They know this, though. The Legos assembled another ambassador and sent him upstairs, to the girl’s room. The Skylanders and Lego want to enlist the American Girls into their cause. (Nina, the girl of said room, thought this was hilarious.) There’s nine of those charming witches. They are indestructible, in that they’re too pretty and too valuable to injure. The vacation week has just begun. If this pact holds all is lost. If this pact holds all is lost. 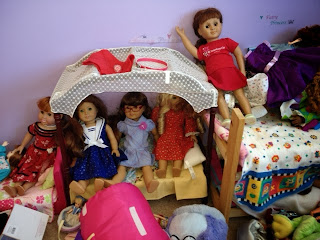 Posted by Michael J. Martineck at 9:00 AM 1 comments