None of the below

There is a petition at Whitehouse.gov asking that “None of the Above” be added to ballots. As of this writing, its got close to 100,000 signatures. I’m guessing these people are fed up with the system and think the easiest possible solution – saying a two-letter, one-syllable word – might help.

Sorry. You’ve got to pick someone. You. If all you’ve got to choose from is tripe and cottage cheese, you can’t say “I’ll starve to death.”

The perception, this being a request to the White House and all, seems to be that the problem is at the top. It’s not. Our is a government by the people. Yes, money and special interests and shadowy organizations have lots of power and influence. But not all of it. Not any of it, in the end. If we all decided to vote for Kanye West he’d win. It would not matter how much money the Koch brothers have, if Wall Street approved or if it was a good idea. That’s the real power. And it’s at the bottom. Us.

Each of the current candidates, and most of those that have dropped out in the last few months (Carly Fiorina being the exception) have had plenty of support in order to make it to the national stage. Donald Trump has never been elected to office, but he’s sold millions of books and hosted a television show for years.

We, as a collective, have done this to ourselves. To complain when discomfort reaches the highest office in the land is to complain too late. To complain at all pales in comparison to voting. Our political process starts locally. That is where attention, outrage and activity needs to be applied.
Posted by Michael J. Martineck at 7:59 AM 0 comments 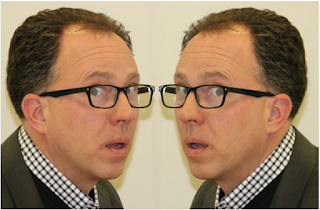 So I meet this guy about my age, with two young children, who has a career very, very similar to mine: Lots of writing and producing and strategizing for a big non-profit. We both try to find meaning and purpose pursuing art and integrity in a commercial world. We fight the uninterested, the unenthused and the unimaginative. I could tell by talking to him that we both struggle with our internal periscopes, poked up from the depths of practical compliance into creative air much easier to view than to breach. We live in the same environment, physically and metaphorically. I probably have more in common with this person than anyone I’ve ever met.

I couldn’t stand the guy. It is interesting to meet someone so like you and not like them. I didn’t hate him. There was no revulsion. But if I never see him again, that would be cool. He bugged me and I’m not entirely certain why.

He had more hair than me. That might be it.

Luckily, I know he won’t read this. He’s too self-involved. I know that because I can’t remember his name. Tim? Tom? Tucker?

Whatever.
Posted by Michael J. Martineck at 11:29 AM 3 comments 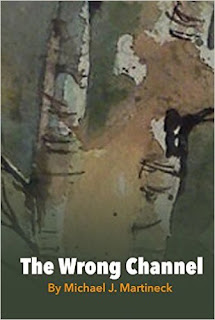 The new cover the The Wrong Channel, the second book of The Misspellers trilogy. It is another fantastic piece of art by Linda Shenk - Etsy shop here. I like that it is spooky without being too obvious about it.  Of course I would, right? It's something I try so hard to achieve in my everyday life.

Try and not quite succeed. On either front. I'm about as spooky as the My Little Pony Halloween Special and more obvious than Donald Trump.  I wonder if that's why I appreciate Linda's painting so much? Admiration for qualities I don't possess.  Like Harry Styles' hair.  Mmmm. . . .