The Otherness Factor, by Arlene Marks. A wonderful view of an even bigger picture 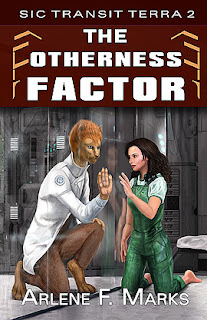 Very Large Telescopes use sets of smaller telescopes to give you a bigger picture of the universe than any of the components could on their own. Arlene Marks’ Sic Terra Transit books work the same way. Lots of points-of-view from a variety of characters let you glimpse through little personal portals, into an intriguing and fully realized world. They let you piece together something you couldn’t otherwise experience. Something big.

Book 2, The Otherness Factor, is deliciously different from The Genius Asylum (Book 1). There are overlaps, family connections and, of course, a shared setting (in the broadest of terms – the galaxy is a big place) but Otherness takes on new characters and new concerns. The complexity is built simply, which makes for a very satisfying read.

As Otherness sits in the Sic Transit series, there are several stories sitting within Otherness. A crystal within a crystal. The first part features Lania, and reads like Little House on an Alien Planet, with a post-modern edge. The second part feels like a traditional Bildungsroman, if they traditionally featured more alien cat-like empaths. Part three brings these two together, and result is exciting, swashbuckling and ultimately quite moving.

Marks brings a sense of realness to this unreal world. It resolves the images into something you could not see any other way. Exactly what I want from a novel.