Stuck in my hat 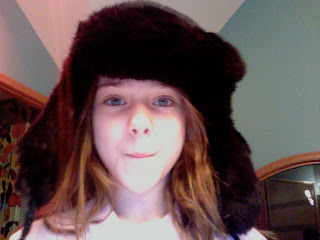 I got stuck in my hat. I have this hat a friend of my father’s brought back from Moscow back in the 60s. He was in the State Department, during the most frigid parts of the Cold War and I love the hat, though it’s really only appropriate to wear if you are A) brandishing a sword on horseback or B) using the snow blower at six in the morning. Post later, I re-entered my home, scraping off a plaster-coating of ice. I’d tied the hat under my chin and it wouldn’t come undone. Tugged, yanked, tried to bend it off my head, but I’d done too good a job. It refused to let go. I had to strip off all my wet clothes and go wake the sleeping wife.

“Sarah,” I said. “I’m stuck in my hat.” She turned on the reading light next to the bed, reached up, nicked open the knot and let the ties drop.

I stared at her.

Yes. That made more sense.
Posted by Michael J. Martineck at 4:21 PM