The terror from below 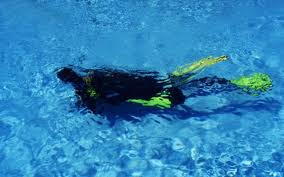 So I’m swimming today, like everyday, in a big collegiate pool, in my lane, lost in thought, when a black shape passes beneath me. I mean holly crap. My vision is stupid without my glasses, but holly crap. After yelping in the water and splashing around for a second, I realize it’s a scuba diver. What else could it have been, really. He’s picking stuff up off the bottom, looking for cracks. I don’t know. He swims to the side, then I don’t see him, then, foolishly, I forget about him. Lost in thought and there he is, passing beneath me. I yelp and flail around for a second time, like some kind of goldfish with a 40 second memory.

I think there’s a writing tip in there, somewhere, with regard to the unexpected, but completely plausible. How context and habit create their own absurdities. There’s a bigger lesson about pool safety, though. I’m not sure they should be scaring the swimmers. At least the half-blind science fiction writers who immediately assume every dark form in the water is a robot shark. Killer robot shark.
Posted by Michael J. Martineck at 5:49 PM