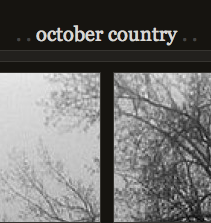 Cinco de Mayo just received a great review at October Country. Of course, if it wasn't great I probably wouldn't be linking to it. Though, I don't know for sure. I haven't had any bad reviews, so I'm not certain how I'd react. It might be a huge post on how ignorant people shouldn't be reviewing books. How some people don't 'get it' and I won't be hailed as a genius until after I'm dead. Luckily, I don't have to do that right now. I got married in October. My wife's birthday is in October. It's nice in October Country.
Posted by Michael J. Martineck at 2:05 PM