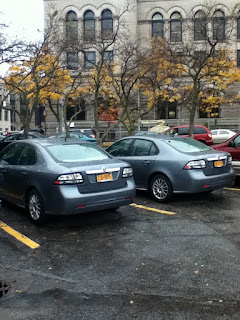 I bought an unusual car. Not Jowett Jupiter unusual, but a Saab in an odd shade of gray. A friend of mine bought the same car at the same time and now parks next to me daily. Originality is not a constant.

A seemingly simple concept, originality. Be new, be different. One might think writers would be rewarded for being such. And one would be wrong. Originality, like ouzo and Oxycodone, works best in moderation.

Editors, movie producers and a good portion of the public want something new. Not everything new. They want evolution, variations on a theme. Too new is frequently too much. Titrating the amount of originality that goes into a piece of fiction is tricky and, I think, an overlooked key to wide success. Novels in particular must avoid cliché and boredom while remaining accessible to humans in the 21st century.

Originality is also as relative as time or motion or most other things besides the speed of light. A work's degree of originality depends on your experience. I tell my five-year-old knock-knock jokes all the time. He thinks they’re great. Because, obviously, he hasn’t heard then a zillion times before. There’s a lot of popular literature that falls into the same dynamic. At any given time, everything up on the big screens is trite to movie-goer over the age of 25.

If you go too far – bend time, twist language, use characters that are completely alien – and you can lose your readers. They need access into a work of fiction. The farther you stray from the norm, the fewer people you take with you.

There are also readers-viewers-aficionados who appreciate the effort. They'll come along for the ride. Eventually, no matter how unusual your car, another just like it will pull up next to you.
Posted by Michael J. Martineck at 11:50 AM