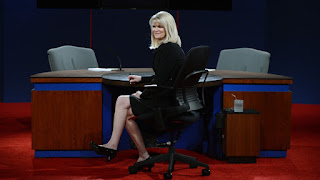 That’s how you run a debate.  Last night’s Vice-Presidential spectacle shows the value of a strong, intelligent and demanding moderator.  A moderator is not a human stack of conversation starters.  A good moderator fosters actual debate, mitigating the 21st century style oral scrap booking.  “I’ve memorized this fact, I paste it here.  I’ve got make this point, I’ll paste it there.”  Martha Raddatz did all this because she spoke.  She asked questions and then – here’s the best part – she asked follow-ups.  Or, in some cases, asked the damn question again because it didn’t get answered.

A lot of time was spent on foreign affairs.  Not the heartbeat of this political season, but welcomed.  Foreign affairs are actually where the president has the most power and can make the biggest differences.  Americans tend to be preoccupied with budgets, deficits and taxes. Constitutionally speaking, those are the matters of Congress.  Not to belittle a call from the executive branch, or to ignore veto ability, but the fact is, anyone can suggest a fiscal plan.  Congress handles matters of finance.  The President handles matters of state and it deserves more attention that this election (most elections) provides.  Again, thanks Martha.

There are no winners or losers in these things.  There is no score keeping.  It is actually a shame the so much attention is given to tone, body posture, Twitter trends and quips.  A debate that’s healthy for country should illuminate the questions before the voters.  Cleverness and temperament  - they help illuminate character - are important.  They are also quite secondary.  Martha marshaled the debate that way, balancing the relative important of substance and style quite nicely.

Part of me wondered during the debate if the gentlemen, being gentlemen, responded better to a woman cutting them off or prodding them in a new direction.  She wasn’t perceived as a third combatant.  Then I decided no.  Martha was just, plain great.
Posted by Michael J. Martineck at 6:19 AM