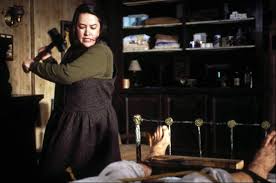 The United States of America has 5 percent of the world’s population and 25 percent of the world’s prisoners. Out of every 100,000 people, we keep 707 in jail. Russia’s at 470. China – 172. It is expensive. The average cost per prisoner in the US is $31, 286 (as of 2013) for a total outlay of $38 billion. Worse is the opportunity cost to the economy as a whole. Some inmates train guide dogs or make cabinets but most would be much more productive outside than in. To punish others in this country, we insist on punishing ourselves, but our redress does not have to be a two-way street.

We should hobble law-breakers.

Why build walls and hire guards to restrict movement when removing a foot from a leg costs next to nothing? In today’s information-based economy hands are important. You don’t need both feet to take orders at Zappos. You need them to run and climb fences, which might what got you thrown in jail in the first place. Hobbling offers an offender constant reminders of his or her errors, saves the country billions and maintains a usable workforce. It is quick, easy and I’m fairly certain presents a sound deterrent to future crimes.

With that, I announce that I am seeking the Republican nomination for President
Posted by Michael J. Martineck at 3:18 PM