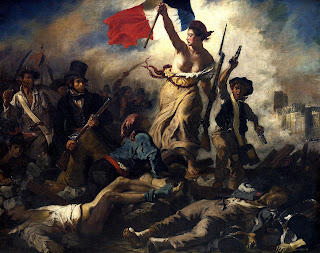 People, and the press, are looking the wrong way when it comes to the imminent Trump cabinet. Yeah, there is a bunch of billionaire executives. That was to be expected. Some are not billionaires, though. I’m more interested in that other half.

That’s about half of the cabinet posts, and we’re not done. Who knows, maybe a quiet, bloodless take-over of the American government by the military is good thing. Or at least on honest thing. If we, as a nation, are spending 57% of discretionary spending on the military - $602 billion dollars a year – we should probably have those numbers represented up-front, at the table.

And we should be thankful there were no beheadings. These ‘strokes against the state’ don’t always go so smoothly.
Posted by Michael J. Martineck at 7:07 AM