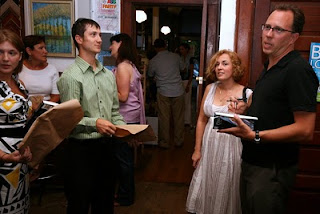 Book launch parties are wakes. Irish wakes. Lots of beer and wine and little sandwiches. At mine, last night, I greeted people, tried my best to chat with everyone, and thank them for showing up, which isn’t always easy for people, on a Thursday night, with kids in Karate class, and such. It’s great that nobody’s dead. Nobody’s getting married or baptized, either. The closest common model for the party is the wake.

Which kind of makes sense. The origin of the morose usage derives from wake, as in to be inactive, but alert. To keep watch. We stand guard as the soul leaves the body for a better place. The book is also leaving the author’s head, for presumably a better place. That the directions of the corporealness are opposite doesn’t matter. We keep watch, just the same. Although bringing something into existence is a lot more fun.

I want thank everyone who turned out last night, and to the Marcus Wise, from 464 Gallery for hosting the event. Parties like that are tough to appreciate in the present, in retrospect, I had a ball. The origin of that term . . . nope. Won't do it.
Posted by Michael J. Martineck at 6:47 PM