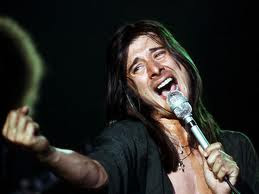 I wish the other Perry was running for President. Not Rick Perry - a 00s reboot with attitude – no, I mean Steve Perry, the former lead singer of Journey. I don’t know anything about his political views. I’m quite sure it doesn’t matter. George Bush the younger ran as a compassionate conservative and proved real light on the first half of that phrase. Barack Obama allowed the impression of his practical progressivism to linger through election day and no longer. So, in politics, you don’t get what you pay for. Making any prior knowledge of Steve Perry’s leanings irrelevant.

Here’s what we do know about Steve. He won’t stop believing. I can get behind that. He’s also got open arms and claims to do things faithfully. Both are big pluses in my book.

Steve Perry is a celebrity. Already. He’s not trying to become a celebrity, with bus tours and reality shows and crazy statements about how his state should secede or how Jimmy Carter is to blame for the swine flu. Rolling Stone named him the 76th greatest singer of all time.

Which is another plus in Steve’s column. He’s a true entertainer. They tend to be much more honest. Entertainers want to entertain you. That’s their nature. There’s no hidden agenda or behind closed doors cigar smoking. There’s applause or no applause. Regan understood this.

Steve Perry’s got nothing to do but try to be a decent president. If I could have it any way I want it, I’d go separate ways from the current line up and follow my foolish heart. Steve Perry in ’12.