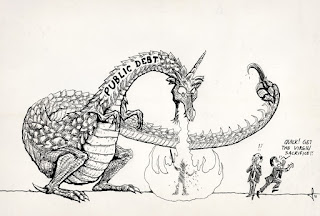 I spend a lot of time writing speculative fiction, so I know it when I see it.  In a lot of science fiction and fantasy, you are presented with a world that is not our own.  Rather than simply write a travel log about these made up lands, writers use it as backdrop for a story.  They create conflict within their worlds.  Just like the US Congress.

A galaxy far, far away would be uninteresting without the dark side of the force.  Six hours of Luke farming?  Watching Harry Potter go to school for seven years without Voldemort would be as much fun as repeating grades 7 through 12.  Conflict drives any story.

And when I say ‘any story’ I mean any story.  News stories are not only included in that phrase, they are in many ways more insidious purveyors of struggle.  They call it real and that makes it worse.  When something like the Fiscal Cliff comes along they juice it until the rind is dry.

Which is why Congress passed the Budget Control Act of 2011 in the first place: to create a story they could play out in front of the public.  A dragon called debt, demands human sacrifice and the walls of our kingdom won’t hold past the stroke of midnight on the final day of the year.

The truth is, America is a gargantuan economy that will lumber along through tax hikes and spending cuts.  Every plank of plan that goes into effect January 1 can be pulled up later.  Gaps can be filled, holes can be plugged.  All Congress has to do is its job.  It can all be rewritten.