Think outside the ballot box 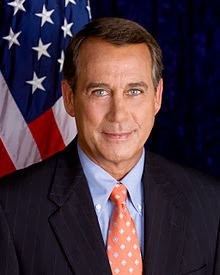 The government is shut down because 30 Republican members of the House of Representatives – and the conservative groups that back them – have enough power not to defeat a budget bill by voting, as per the sacred Constitution – no, they have enough umph to keep John Boehner from bringing the bill up for a vote.  Which would probably pass.

I have no idea how the Speaker feels about shuttering the government.  I’m betting, after 22 years in the House, he wanted to keep things open.  His concern is that the Tea Party 30 can sway enough other congressmen to unseat him if he strays from their side.

The Speakership is an open selection.  The Democrats can vote for anyone they want.  The Speaker doesn’t even have to be a Congressman.  If the pretzel cart guy got the majority of votes, he could be Speaker.  If Democrats pledge their votes to Boehner, he’s immune from coup d’etat.

And everyone could get back to work.  Even those that don’t want to, because they’re getting paid regardless.
Posted by Michael J. Martineck at 8:02 AM