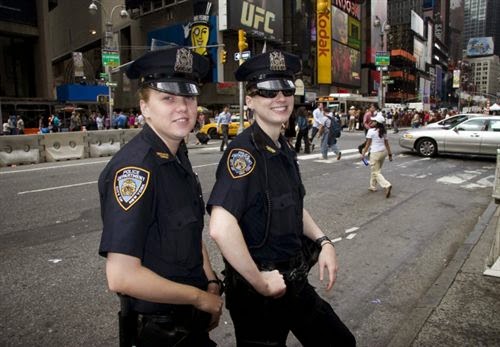 Troubles in Ferguson, Missouri, and Staten Island, New York have left two young African American men dead at the hands of white police officers. The incidents feed racial fires and raise calls for more police of color, but that is only part of the problem. The violence isn’t just white on black  - it’s men on men.  We are taught to be competitive from an early age, it is reinforced throughout our lives by the majority of popular entertainment and it may very well go even deeper than culture.

Men and women are equal. Done. Glad I got that out of the way. They are not, however, the same. Multiple studies have shown that female brains have more interconnections and that leads to more holistic, big-picture thinking, better communication and a more complete understanding of social contexts. Sounds like a great skill set for a cop – if the cop’s purpose is to keep the peace.

Men tend – tend, mind you, as opposed to ‘exclusively’ or ‘universally’ – to be better at single-tasking and staying on focus. Wonderful skills for hunting, as in tracking down and capturing criminals. Combined with more profound upper body strength and an urge to compete, men are designed for conflict. Women, for dealing with it.

Which makes me wish that more than 14 percent of our nation’s police forces were women. The simple fact is they get into fewer pissing matches. Not none. God knows. Fewer.  They are less likely to compete for the sake of competing. There are not a huge number of studies to support this, but only because there have not been a huge number of studies on the subject at all. Those that have peered at the topic agree that women make excellent law enforcement officers.

Back in 1981 The Police Foundation followed 86 male and 86 female rookies for a year and found that the women were just as effective as the men when if came to police work. But, they were less likely to engage in “unbecoming behavior” and “more effective at defusing potentially dangerous situations.”

There’s a chance a female officer would have made no difference in the sadly short lives of Michael Brown or Eric Garner. It’s not a good chance, though. If the officers involved had stepped back, taken in the whole of the situations, de-escalated the conflicts, maybe heard “I can’t breathe” – things might have turned out different. I don’t know. Not everything’s black and white.
Posted by Michael J. Martineck at 11:13 AM