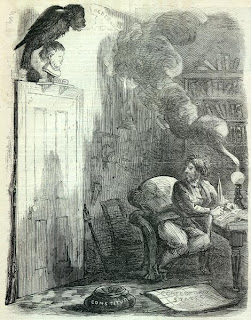 This last Superbowl, the NFL spent more on confetti than Edgar Allen Poe earned in a lifetime.  Yes, yes, poets are always poor.  It’s part of the mystique.  Who would even trust a wealthy poet?  How would they, you know, poet?  Still, seems a shame that Poe writes a piece that thrives for 168 years, and comes to be appreciated by football fans, no less, and dies destitute.  The professional football/poetry crossover is rare.  The Baltimore Ravens are an exception.  There’s no Los Angles Dream Deferred or Las Vegas Wasteland.  You can’t watch the Portland Road Not Taken vs. the Salt Lake City Seekers of Truth, though that would be pretty cool.

Poe initially sold his poem for $15.  There were further publications, but he never made any real money.  Not football money.  Funny how that works out.  Something enduring like a poem doesn’t generate a lot of income because it’s ubiquitous.  Something momentary, like a football game, brings in huge amounts of cash.  It’s value is based somewhat, in its inability to endure.